Las Vegas Strip is the main avenue in Vegas, where you will find most part of the attractions and hotel & casinos of the city. The Strip has a length of 4mi, which are on the Las Vegas Boulevard, and it is there that they concentrate almost 80% of all the entertainment and tourist attractions. The main hotels, the shows and the largest concentration of people are in this huge avenue that cuts Las Vegas from end to end. Since many residents do not like that crowd of tourists and casinos, they eventually move to remote areas, so the avenue became a tourist place. 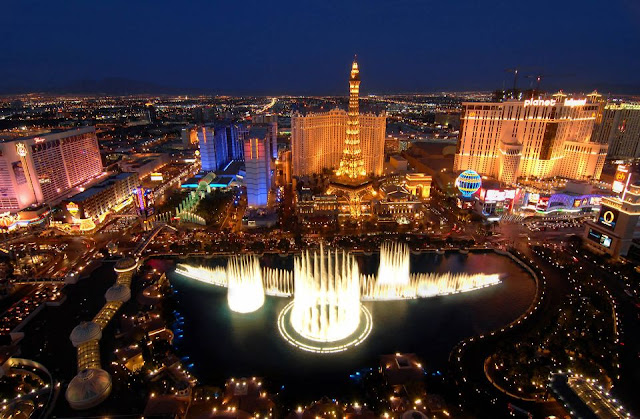 Accomodations on the Las Vegas Strip

A very important tip that will make all the difference in your trip is to stay at one of the hotels located on Las Vegas Boulevard, the famous Strip. The best and most famous hotels are there, and since the variety is huge, this area has hotels for all pockets. The price may be a little higher than most hotels, but it is really worth it. The Strip is huge and has more than 30 giant hotels around there, with luxurious pools, nightclubs, restaurants and amazing casinos. The best Las Vegas shows are there. There you won’t face any lack of entertainment and it is almost impossible to know everything, because there is a lot of things. The tip is to stay right in the middle of it, where Bellagio is located, which is the best location. Even if you stay in a hotel in there, the outlets and other attractions are far away, so renting a car helps a lot. 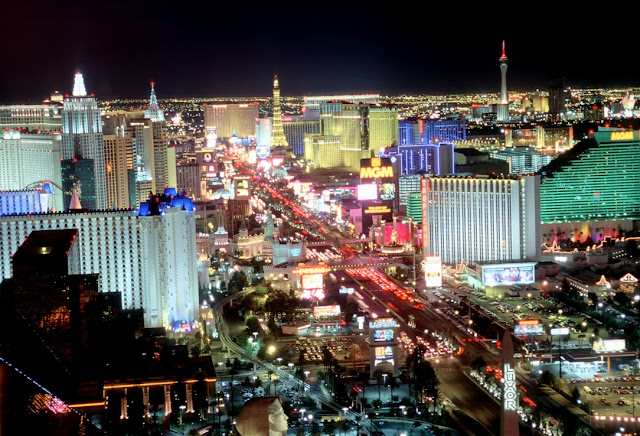 Hotels and attractions at the beginning of Las Vegas Strip

The first hotel you will find on the Strip when entering the city is the Luxor Las Vegas, which is in the south of the avenue. It is an amazing hotel in a pyramid form and with Egyptian decoration. It is worth visiting it. Hotels & casinos are themed and have attractions for all tastes, so be prepared to walk across the street and get to know each of them. 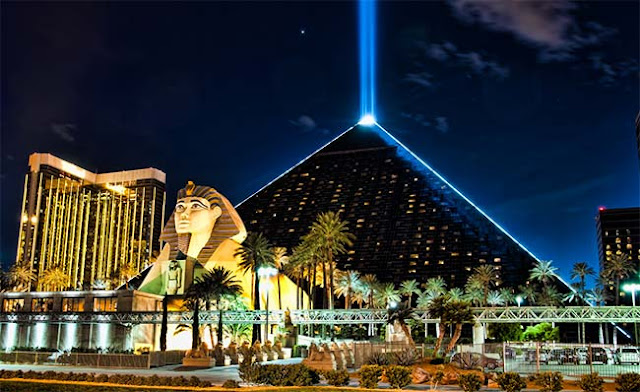 Among the first hotels on the Strip, is the MGM Grand, which is one of the most famous hotels of Vegas, where they have real lions living there and where the major UFC events take place. You will also see the Mandala Bay and the Excalibur, which is a hotel based on the medieval age and has a castle format. It is worthwhile visiting all of them, so you will spend some hours to get to know each one. You can book a night to know that part of the Strip.

A cool tip for anyone going to Vegas is that hotels, restaurants, tourist sights, outlets and many other attractions are far away from the Strip, so renting car is an excellent idea, not to mention that with a car you can go to the Grand Canyon or California, which is very close. See our article on how to rent a car in Las Vegas with all the tips you need to know and on how to get an incredible price comparator with great prices.

Moving forward on The Strip

Just in front of MGM you will find New York - New York, which is a replica of New York City, with restaurants, stores, decorations, everything related to the most known city of the world. It has a giant roller coaster that goes around the hotel, from which you can see the whole Strip, and it costs only $ 20! There is also the classic hotel Monte Carlo and the Aladdin, which do not have many attractions but are worthwhile visiting. There is the luxurious Paris, which is a replica of the French city and even has an Eiffel Tower. There you can go up to the observatory, where you can see the Strip, enjoying an incredible view, and getting an idea of the size of Las Vegas Boulevard avenue. Do this tour at night, because the view is beautiful. 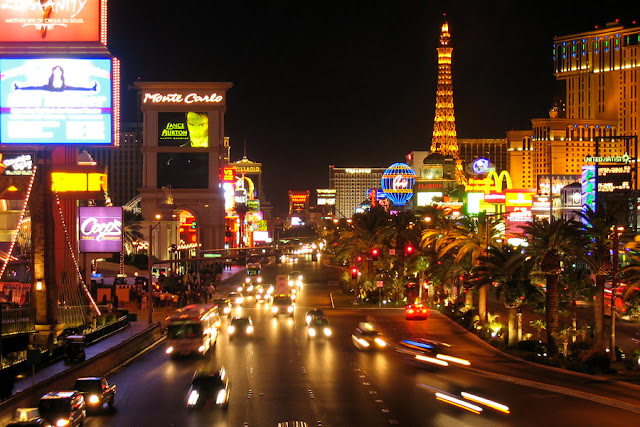 In the middle of The Strip Las Vegas, you will find the most famous hotel in town, the imposing Hotel & Casino Bellagio, which is in front of Paris. A hotel with Italian style, which has a unbeatable glamor and a huge reputation worldwide. In addition to the casino and to the restaurant, Bellagio has an incredible fountain with a water show, which is free and happens every half hour during the night. It is the most beautiful attraction of Las Vegas and anyone in the street can watch it. You should take a walk inside the Bellagio, because it has many attractions. Right next to it, there is the giant Caesars Palace, with an amazing decoration of the imperial era, being one of the nicest hotels in Vegas. It became famous by the movie "The Hangover" and has a huge shopping mall and several restaurants. 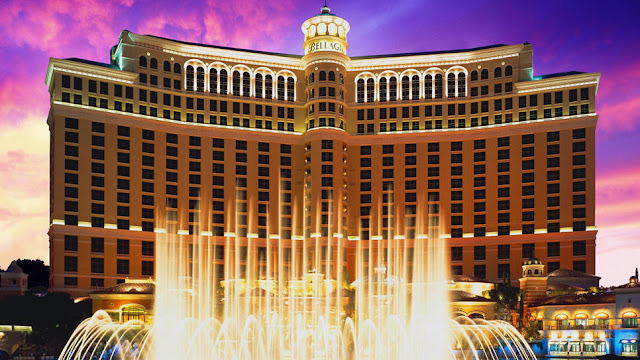 Still in the middle of the Strip, you will find the Hotel & Casino Flamingo, the Imperial Palace Harrah's and the Hotel & Casino The Mirage, which is a beautiful hotel with a huge garden full of animals and a free concert on the avenue Boulevard Las Vegas, which is the volcano show, where a volcano erupts. Next to it, is the Hotel & Casino Treasure Island, which also has a free show at The Strip, where pirates duel in an amazing performance. In front of it is the magnificent Venetian, which is a replica of Venice, where you can walk around in romantic boats across their rivers. This area of ​​the avenue has many cool attractions, so it is good to book a night to explore it. 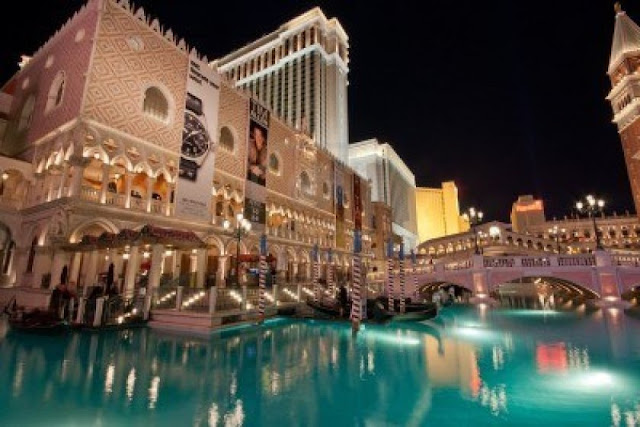 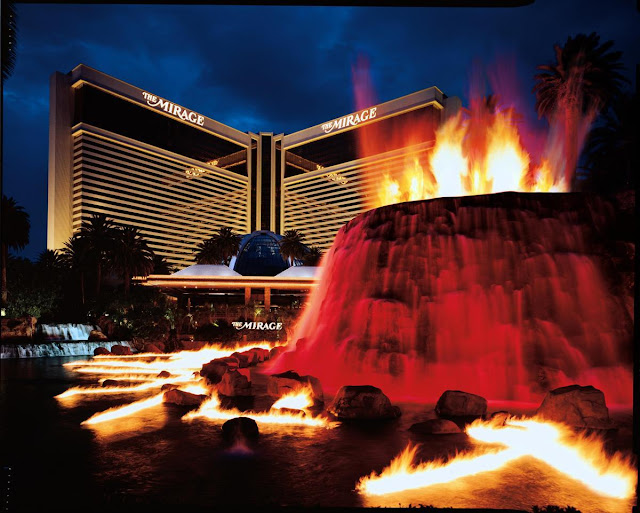 At the end of Las Vegas Strip, will you find the Circus Circus, which is a circus-themed hotel that has amazing ​​shows and a huge amusement park. There is also the famous Wynn Encore, which is one of the most luxurious and expensive hotels in Vegas, where you can find the best parties and concerts of the city. And at the very end, far away from everything else, you can find the Stratosphere, to where you will need to take a taxi, because it is really far. It is the highest tower in Las Vegas, with a restaurant on its top that rotates 360 degrees while you eat. They have extreme activities up there, like the elevator that falls and the Mexican hat. It is one of the most extreme attractions of the world and it is where you can have one of the most beautiful views of Las Vegas. 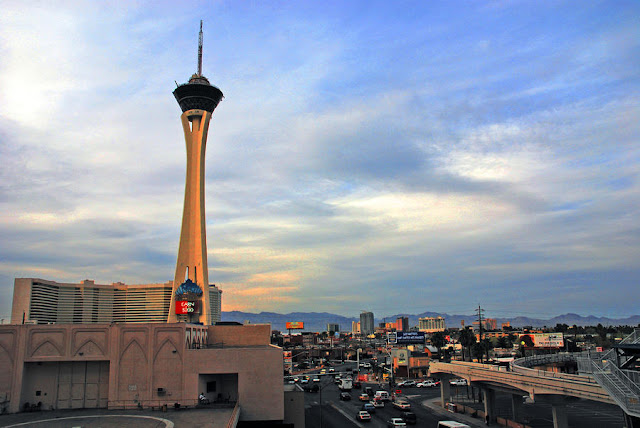 All hotels are amazing and have special themes, and you will enjoy all of them. Get out calmly, take a drink and walk around The Strip during the whole night. In Las Vegas Boulevard Avenue, in addition to these luxurious hotels, they also have small hotels and small casinos that are cheaper to play. If you are not a professional player and do not want to spend too much money, go to these smaller casinos. A tip to get free drinks is to keep playing in any of the slot machines, because the waitresses keep serving you drinks for free. You just have to give them a tip when they give you a drink, this way you can stay there doing it all night long.